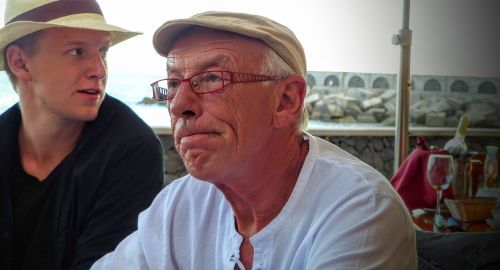 Who is interested in cultural, archaeological and historical information about La Palma literary, comes to Prof. Harald Braem not past.

In more than 30 books he has incorporated scientific facts, among other things, into exciting crime novels.

His last crime novel: “Death in the Barranco”.

An example of his relevant books (review below)

“In the footsteps of the indigenous people” – an archaeological guide to the Canary Islands:

“As for many before and after him, for Harald Braem this spark that cannot be captured, that jumps over abruptly and without warning, was decisive for the decision to settle in the Canary Islands. “I fell in love with this island when I was here on vacation for the first time in 1984.”

A year later, it could already be confidently said that Don Harald had made La Palma home. He completed his first research assignment on the island already using his own house as a base. The documentation of the cave images of La Palma occupied him for several years. The search for traces of the Canarian natives was of course not limited to La Palma. On La Gomera, the German professor was one of the first to tackle archaeology scientifically. On Tenerife, Harald Braem worked for several years with Thor Heyerdahl on the exploration of the pyramids of Güimar and on theories about the arrival of the first settlers in the Canary Islands. The archaeologist also worked on several projects in Gran Canaria. Among other things, he explored the caves of La Fortaleza de Ansite, where the last indigenous people fought, and he was one of the first to investigate the sites near Mogán.

Researcher Braem is one of those lucky people who not only go through life with their eyes open, but also see and find things along the way. Like the seven phonolite vessels Harald retrieved from the barrancos of La Gomera, four of which are on display at the island’s Archaeological Museum. “It wasn’t easy,” he reports, “When we brought the vessels down from the mountain, the museum didn’t even exist yet. It didn’t open until 2007, and today it displays close to 30,000 pieces. Whether all of them are really what the signs say they are cannot be confirmed. Neither can the whereabouts of the other three cult vessels I found.”

“I like to stay in the background,” says Harald Braem. But even from there can be aptly worked – and in many directions. The 71-year-old’s life has been full of twists and turns and surprises, but always intense and engaging. And this is by no means a retrospective, on the contrary. “A few days ago I was in a few caves around here,” he says in the garden of his house on La Palma. Between flowers and shrubs, the view finds the west coast of the island with the Atlantic as a backdrop. Harald points out elevations and stretches of land that are hard to make out for the uninitiated, he tells of their meaning and history with the words of the one who is captivated by his cause and the comprehensiveness of the one who knows. He reminds a little of the professor he was for almost 20 years at the FH Wiesbaden. His lectures were certainly well attended, every student is happy when someone stands at the lectern who can present complex issues full of verve and conviction.

“I studied all kinds of things, I was always true to my interests,” says Harald Braem looking back. A look at his curriculum vitae confirms this. With so many occupations and activities, the question suggests itself: “When did you find time to write?” The answer is initially surprising: “Writing, poetry, was my first passion. I started writing as a child and I feel like a poet.” The bibliography is like a mirror of the author: versatile are the topics and intense the examination of them. The success speaks for itself, his work on color psychology “The Power of Colors” (Munich, 1985) is a standard work and has been translated into several languages, including Chinese, Korean and Russian. Even before that, his first book had been printed, a collection of short stories under the title “A Blue Butterfly Over the Razor Blade,” and since then scientific works have appeared regularly, alternating with fiction.

There are more than 30 books to date, and 750 if you count individual publications. Sometimes the literary classifications become blurred, as in the archaeological travel guide “Auf den Spuren der Ureinwohner” (Zech Verlag, Tenerife, 2008). Scientific facts are packed into exciting stories here, theories and data, clarified with illustrations, mix with the author’s own adventures, who has been at the forefront of many archaeological discoveries of recent decades. Or in the historical novel “Tanausú, King of the Guanches”, in which the true story of the subjugation of the indigenous people is told from the fictional point of view of the young Guanche Bencomo, but in parallel also from the point of view of the attackers, not all of whom agreed with the ruthless approach of their commanders.

In his last published crime novel to date, “Death in the Barranco” (Zech Verlag, Tenerife, 2013), the author’s experience and expertise also carry the plot. A mystical thread runs through the thriller, a sacred place of the Guanches has an effect on the random and arbitrary people of the present. Harald Braem often experiences this effect himself. “I can’t explain it, but on La Palma, on the Canary Islands, in the many lonely and hidden, historical and spectacular places, writing flows out of my hand. The environment is conducive to creativity.” His partner Sylvia Catharina Hess also confirms this. She is a successful painter with many international exhibitions. At her house on La Palma she has set up a studio flooded with light, and what is created there confirms in form and color the influence of the creative aura of the place.

The artist couple with scientific coloring does not live permanently in the Canary Islands. Sylvia also has a studio in Germany, and Harald pursues his many commitments in the old homeland. “Our home is actually here, on La Palma,” they both confess. They have traveled the world for business and pleasure to find their haven on the “Happy Islands.”

Happy are these islands possibly – as far as volcanoes in the ocean can be happy. What seems certain is that the people living on them are closer to happiness than anywhere else. “There are sources of radiation that could be responsible for this,” Harald tells us, pointing to “Roque de Idafe” a monolith that is hard to make out against the rocky background. “Intense radiation can be measured on this stone. For the Guanches, it was a sanctuary and a place of healing.” Even today, a visit to this stone is said to have positive effects.

But to receive positive vibrations, you don’t have to climb mountains or climb through canyons at all. The good humor in the two artists Harald Braem and Sylvia Hess is contagious, their enthusiasm genuine, and it is clearly reflected in their works. Sylvia is working on a new series of paintings, and Harald has already finished writing his new book, both will be on the market soon.

Until then, more can be learned about their lives and work on the websites www.haraldbraem.de and www.art-hess.com.

Author Harald Braem opens his work with the remark, “The Guanches: A thousand questions and no real answer?” And indeed, on the one hand, a mysterious fascination emanates from the indigenous people of the Canary Islands, on the other hand, there is still little secured knowledge about the history and everyday life of the Guanches. Braem’s book makes an important contribution to partially closing this knowledge gap.

He begins with a comparison of different theses about the origin of the settlement of the Canary Islands: where did the pre-Hispanic conquerors come from? Thereby these theses (among others the “Atlantism myth”, the “Berber theory” and the adventurous thesis that the first settlers of the Canary Islands came from America, are tested for their probability with mostly convincing arguments, although a bit short). Finally, Braem gives preference to the Atlantic Western culture theory and also relies on archaeological arguments (e.g. comparison of pottery finds on the Canaries with similar ones in Ireland and Galicia). Of particular interest in this context is a possible connection between the Canary stone circles (tagoror) for cult and assembly purposes and Stonehenge or similar cult sites in Ireland and Scotland.

The author devotes the second part of the book to an analysis of the everyday life of the ancient Canarians (called Guanches on Tenerife). The weighting and the informative value of the individual articles of this section are different. While the chapters on diet, music and dance of the Guanches remain rather superficial and often speculative (and must remain so due to the lack of data sources), the articles on burial rites and writing or rock paintings of the indigenous people are very detailed and informative.

The third and most extensive part of the book is reserved for the actual archaeological guide. Here Harald Braem offers guides, illustrated with good maps, to the most important archaeological sites of the Canary Islands, many of which are still largely unknown. Admittedly, among the presented natural monuments and cult sites of the natives there are some that have already become famous: the phallic Roque de Idafe on the island of La Palma, the “pyramids” of Güimar on Tenerife, the Roque Bentayga on Gran Canaria or the district of the spectacular table mountain “La Fortaleza de Chipude” on La Gomera. But it is Braem’s special merit to also bring to light hidden archaeological traces that tourists often carelessly walk past.

This overall very informative work is completed with a small “Guanchenlexikon” and a useful glossary. The original Guanche names of the Canary Islands as well as their political division before the Spanish conquest are also taken into account. And the best: although well-founded and well-researched, Braem’s book is not scientifically dry, but entertaining. For as the author himself puts it in the preface, “After all, it’s not supposed to be work to read the book, but pleasure…” And it does.

Please enter your username or email address. You will receive a link to create a new password via email.